Deutsche Bank – Too Big To Fail or Too Complex To Survive?

Complexity and interdependency are the hallmarks of our time. The increase of complexity and turbulence in the markets and in the economy demands new approaches when it comes to making investments, running a business, strategy and governance. Excessive complexity is the source of fragility and exposure. In our view, it is the main threat to sustainability. Excessive business complexity and interdependency impacts its profitability, exposure and sustainability since it is a formidable source of:
• Inefficiency
• Fragility
• Ungovernability
One example which confirms this is certainly the case of Deutsche Bank. It has embarked on a complexity reduction program (in order to “Transform its operating model to achieve higher efficiency, reduced complexity, better resilience and resolvability”). We hope it succeeds. The bank plans to slash 35000 jobs and reduce the number of (IT) operating system from 45 to 4! Deutsche Bank has reported a staggering cost/income ratio of 83.6% (Q1, 2015). The value of its stock, illustrated below, speaks for itself. 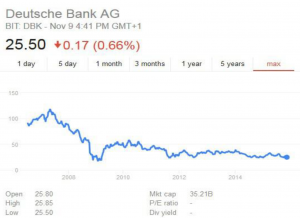 The bank is also sitting on a mountain of derivatives, 54.7 trillion Euros. That’s 20 times the GDP of Germany. 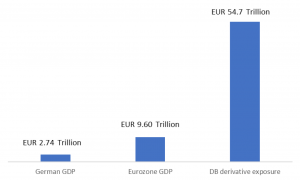 New CEO John Cryan said “We must reduce Deutsche Bank’s complexity“. We couldn’t agree more. If the complexity of this super-huge bank is not reduced, it will eventually spill over into the system, reducing its governability, resilience, sustainability.
A recently published article in Financial Times states: “Deutsche now has, for example, more than 100 different booking systems for trades in London alone, and has no common client identifiers. It has even been unable to retrieve some of the data requested by regulators — which contributed to its failure in this year’s US bank stress tests.”
Deutsche Bank is certainly Too Big To Fail but the problem is that it may also be Too Complex To Survive. In either case it is a big problem. For everyone. In the best of cases, it is surely very difficult to fix. Deutsche Bank may certainly be qualified as an Extreme Problem. Read here.
So, yes, we all agree that Deutsche Bank is very large, it is complex and it is a huge systemic bank. The question, as usual, is to measure complexity, not to talk about it. The point is: science, not opinions. Since we prefer to measure things before we speak, we’ve run a quick and dirty comparison of the complexity of a dozen large European Banks. The analysis has been based on Banking Ratios. Results are relative to Q1 2014. The complexity ranking is illustrated below. 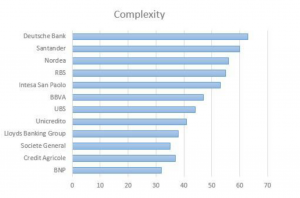 Deutsche Bank is not just the most complex, its business also has the highest degree of interdependency: 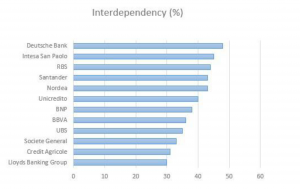 A look at its Complexity Map gives a better idea of what we mean by high interdependency: 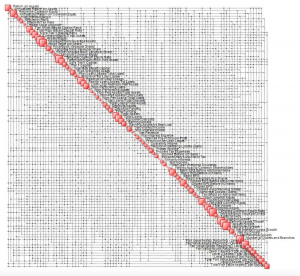 Restructuring a business of this nature may not be easy and major surgery might be necessary. And, mind you, this is just a glimpse of the business based on Banking Ratios. A mere 100 parameters!
In reality there are thousands that one should take into account before sketching out a strategy. Cost reduction is fine but it is not necessarily synonymous of complexity reduction. In order to really reduce complexity and maintain it at desired levels one should monitor it on, say, quarterly basis. A one-off initiative, such as slashing jobs, is not a cure. Complexity reduction may be accomplished only if performed on a scientific basis. First of all, the main drivers of complexity should be determined and monitored. In the case of Deutsche Bank these are (based on Q1 2014 banking Ratios):

Other news in same category...

London, February 1-st, 2020. The Massively Parallel Processing version of OntoNet™ is available for commercial applications at the Bologna-based CINECA Supercomputer Center. MPP OntoNet™ has been developed by Ontonix in collaboration with US-based SAIC, a premier technology integrator solving complex […]

Optimum Launches Portals for Complexity Analysis of Stocks and Corporations

Please read this important information before proceeding. It contains legal and regulatory notices relevant to the information on this site.

This website provides information about Optimum Complexity Limited (“Optimum”).  Optimum is authorised and regulated by the Financial Conduct Authority.  The content of this website has been prepared by Optimum from its records and is believed to be accurate but we do not accept any liability or responsibility in respect of the information or any views expressed herein. The website is provided for the main purpose of providing generic information on Optimum and on our investment philosophy. It does not constitute or form part of any offer to issue or sell, or any solicitation of an offer to subscribe or purchase any investment; nor shall it or the fact of its availability form the basis of, or be relied on in connection with, any contract therefore. This information is directed only at: (i) certain persons having professional experience relating to investments; and (ii) certain high net worth organisations, each as set out under the Financial Services and Markets Act 2000 (Financial Promotion) Order 2005. It is not intended to offer investors the opportunity to invest in any Investment product.  No information contained in this website should be deemed to constitute the provision of financial, investment or other professional advice in any way.  The website should not be relied upon as including sufficient information to support any investment decision.

Although the information in this communication is believed to be materially correct as at the date of issue, no representation or warranty is given as to the accuracy of any of the information provided. Furthermore, no representation or warranty is given in respect of the correctness of the information contained herein as at any future date. Certain information included in this communication is based on information obtained from third-party sources considered to be reliable. Any projections or analysis provided to assist the recipient of this communication in evaluating the matters described herein may be based on subjective assessments and assumptions and may use one among alternative methodologies that produce different results. Accordingly, any projections or analysis should not be viewed as factual and should not be relied upon as an accurate prediction of future results. Furthermore, to the extent permitted by law, Optimum, the investment products it manages, and its affiliates, agents, service providers and professional advisers assume no liability or responsibility and owe no duty of care for any consequences of any person acting or refraining to act in reliance on the information contained in this communication or for any decision based on it.